Posted by thepoetscane on September 21, 2015 in Latest News, UK

Liverpool inventor Mark Garson has been awarded the Nobel peace prize for inventing a ray gun that silently vaporises door to door salesmen on the spot, with no mess and no drawn out court cases.

The gun, which is fuelled by sunlight, doesn’t work too well in the UK, but is being touted as the ‘greatest thing since sliced bread‘ in warmer climates.

The gun can melt a human being instantaneously. Just point directly between the eyes of the street pest that has knocked on your door twice in ten minutes despite the plus-size neon ‘no door to door sales’ sign in your window.

“Just one squirt between those sucker’s eyes, and poof.”

Mark told us, “The idea came to me in a dream, in which I had to answer the door over and over again to a naked salesman trying to sell me my own undies back off my washing line. I spent four years trying to get on Dragons’ Den to promote my device, but eventually I gave up and sold my soul to the conservatives instead in order to fund the research. I suppose I could have sold the device door to door, but I figured it would be a bad idea.”

The gun can also be used on street surveyors and those men who block your entrance to Tesco with their Sky package placard.

Due to popular demand, Mark is now developing a version that can be used down the telephone on those irritating insurance and PPI callers. 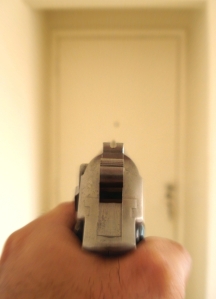 ← Man Accepts Pay Rise After Being Promoted
Celebrity Plankton in The Australian Jungle. →