News: As True As Lies Can Be
2 Comments 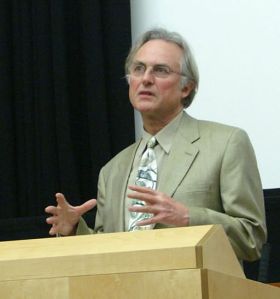 Following on from his previous Twitter tirade of misogynistic, anti-semitic, Islamophobic, sandwich-hating tweets, Richard Dawkins has once again set the world of internet outrage addicts aflame with a new set of controversial tweets, only this time his supporters insist he has been misinterpreted and that he has nothing to apologise for.

Earlier this week, Dawkins tweeted a link to a YouTube cartoon showing an Islamic terrorist arguing with a feminist before chopping her head off while shouting: “It’s ok, it’s a cartoon!” Alongside the link, Dawkins wrote:

Immediately people began calling for Dawkins to apologise, but his supporters insist he’s being unfairly targeted:

“It’s clearly satire. You can tell because it’s a cartoon,” said @manskeptic

“The video doesn’t suggest we should kill all women, just radical feminists who annoy us #notallwomen,” said @MRAskepPUA

“It’s just a cartoon. We have free speech. You all just need to lighten up!” said @twatskep

Dawkins, on learning that the woman in the video was based on a real person, deleted the link and apologised, kind of:

“Ok, no-one should be killed, even in cartoon form. But she seems like a bitch, so it’s alright for me to find this funny.”

This bet-hedging response from Dawkins fomented more anger and ultimately led to his being disinvited from an upcoming conference. His twitter supporters weren’t happy at all:

“Dawkins is a hero. You women are just jealous. I have 122 pages of tweets at Storify.com that prove two of you were horrible to me once. It’s in no way creepy.”  said @FrothyMuggingSkeptic

“This is so typical of SJWs, so easily upset over nothing. Where were you when my cat died? I have 473 pages of tweets at Storify.com that prove you only get offended by things important to you and not me.” @creepystalkerwhowontadmitit

There even appeared a video from popular YouTube atheist BlunderGu5t, which showed Richard Dawkins being crucified by a gang of screaming women.

“It’s just a video!” he screamed when criticised. “Where’s your sense of humour? Why won’t someone laugh?”

The internet storm reached its zenith when two groups of people met just this morning at the atheism conference Dawkins was originally invited to speak at. One group was made up of Dawkins supporters, the other of those critical of Dawkins. Civil at first, it soon descended into chaos, with shouts of MRA! and SJW! being hurled back and forth across the room.

“It was like something out of a war film. So much blood! Half of them didn’t even know what MRA or SJW stood for, let alone whether it was supposed to be an insult or not. They ended up just fighting over what the terms meant. And I swear to God someone screamed “This is for LiftGate!” and then began swinging a chair around.

“The stupid thing is, the organisers had changed their minds and rescheduled Richard Dawkins for that morning and nobody noticed. He spoke to an empty room surrounded by bodyguards. One of the bodyguards has apparently started questioning his Christian beliefs though.

“I hear there are going to be some blogs about the incident tomorrow, adding up the scores.”

The Sceptical Poet has sent requests for interviews to the main parties in these events, but has yet to receive a response.

“So long, and thanks for all the shit.”