Posted by thepoetscane on April 12, 2016 in Health and Lifestyle, Latest News, UK 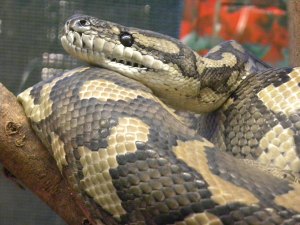 A snake owner from North Wales has refused to name her new pet python Monty, eliciting a storm of outrage from her local village.

“It makes no sense,” said Helen, owner of the local sweet shop. “What’s the point in owning a python if you’re not going to call it Monty? It’s the only funny option. We live for that kind of shit round here.”

Helen wasn’t the only person to complain:

“It’s an insult to the tradition of a good pun,” grumbled Dave, a local comedian. “If you have a duck, you call it Donald. If you have a bear, you call it Paddington. No-one here owns either, but you get my drift.”

Myfanwy Jones, the owner of the python, is bewildered by the reaction:

“I own several animals, some of them with puns for names. I’ve got a basset hound called Rufus, a rabbit called Roger. I feel I’ve done my bit for cheesy names. Heck, my own name is the most clichéd Welsh name you could ever imagine. It doesn’t even sound real.

“I’m sorry, but calling a python Monty is just too obvious. If you’re going to use a pun, have some imagination. I’ve got an adder called Carl Gauss. No-one noticed that one. Fuck you all, it’s funny.”

Myfanwy’s new python is thought to be called Colin.

← This Month’s Horoscope: Aries
Haddaway Claims to have Never Received Satisfactory Answer to his Question ‘What is Love?’ →