Theresa May Resigns as Prime Minister

Posted by thepoetscane on July 12, 2016 in Latest News, Politics, UK 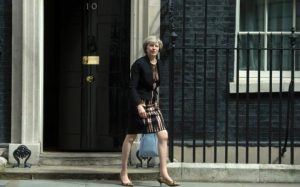 In the latest twist of the complicated saga that is modern politics, newly appointed Prime Minister and leader of the Tory party Theresa May has handed in her resignation.

When asked why she had made the decision, she stated:

A hasty leadership election was called an hour ago, but all four candidates pulled out within minutes. The job is rumoured to be going to Jeremy Corbyn because he’s the only party leader capable of staying in the post longer than five minutes. At this point no-one cares about policy, they just want someone in the driving seat.

Nigel Farage reacted to what he saw as evidence of reluctance to push Article 50 by rejoining UKIP, uttered some offensive drivel in a speech, then resigned and went the pub.

“As far as I’m concerned we never had a referendum and no-one voted for brexit. LalalalalalalaSHUTUP!”

Ms May was last seen leaving on a ship for the fabled land of Valinor like all the other elves who saw this shit coming and decided to throw the hobbits under the bus.

As news broke in the EU of May’s resignation, Jean-Claude Juncker just sighed the biggest sigh anyone has ever sighed in the history of sighs, and said:

“What the fuck is wrong with you people?”

Answers on a postcard.

← The Sceptical Poet is now on Patreon!
Corbyn Kidnapped by Labour MPs after Hunting Rare Pokémon →