Posted by thepoetscane on July 1, 2016 in Latest News, Politics, UK 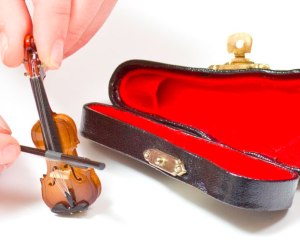 The obscure art of tiny violin making has been given a boost after the fallout from Brexit saw sales rise to record levels.

“It’s normally slow in the violin trade. Now I can’t move for angry, sarcastic customers wanting the smallest violin they can get so they can play it during conversations with upset and regretful brexit voters.”

Anne Jenkins, a private music teacher from said she was swamped with work:

“Everyone wants to know how to play a tiny violin. Especially really maudlin music, as it sounds more sarcastic. I voted Remain, but frankly this has been a huge monetary gain for me.”

We caught up with Maz Jones, a Remain voter from Liverpool, who told us:

“I’ve built up the saddest repertoire of violin solos I could find. I use particular pieces depending on what kind of regretful stupidity gets said to me.

“For example, if someone says, ‘I thought they really would put £350 million into the NHS every week,’ I play John Williams’ theme from Schindler’s List. I like to get really close to their face when I do it.

“If they say, ‘I never thought my vote would actually count,’ I play the second movement from the Mendelssohn violin concerto in Em while staring mournfully into middle distance.

“If they say, ‘Christ, this is a nightmare, I really shouldn’t have voted purely on petty nationalist emotion and ignored every expert opinion in the world!’, I play Dreamers Awake by Paul Buckmaster while pretending to get shot in slow motion.

“If they say, ‘Why are all the foreigners still here?’ I shove the violin down their throat and kick them in the shins. It’s alright, I’ve got a bag of spare violins always on my person.

“The coup de grace is that the violins are produced in Poland.”

← Tim Peake: Can I Go Back to Space, Please?
The Sceptical Poet is now on Patreon! →