The Pope is Gay

Posted by thepoetscane on February 24, 2016 in Latest News, RELIGION!, World 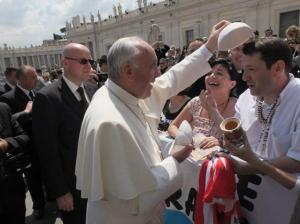 In what has been called the greatest ‘troll’ of all time, Pope Francis has revealed that he is gay.

Pope Francis, real name Jorge, was giving a speech to a gathering of cardinals in his capacity as 266th leader of the Catholic church. In the middle of a half-arsed sentence about potentially ‘modernising’ the church one day if the pressure to be moral becomes too great, he suddenly told the large group of bored men:

Jorge then began distributing leaflets on safe gay sex to the most rampantly homophobic cardinals, before shouting:

He then threw off his Pope uniform, revealing a rainbow flag designed Pope outfit, and ran straight to a press conference where he revealed the truth to major news outlets.

Top figures in the Catholic church have denounced Jorge, saying the Devil must have tricked them into voting in the wrong Pope, and that while there is a place for sexual abuse in Catholicism, simple sexual orientation in favour of the same sex was utterly out of order.

Catholic church-goers around the world have reacted with shock, while everyone else thinks it is hilarious. Bookies have recorded huge profits as hundreds of people had placed bets that Francis was secretly the actor Jonathan Pryce.

In an interview with Attitude magazine, Jorge also revealed that he put shellfish extracts into all of the Vatican’s food, and performed Pope duties on the sabbath when nobody was looking, although he knows that it is the gay thing which will really annoy the top brass in Rome:

“It was my friend Gabriella’s idea. We had a bet who could get to Pope first. She would have pretended to be a man and worked her way up the slippery Pope slope. She’s also gay, so that’s a double whammy. I got there first though. She got found out when the priests tried to molest her.

“I’ve also secretly changed some documents, so all rapists will be reported to the police, LIKE YOU’RE SUPPOSED TO.

“I’ve put a couple of edits in the Bible too, but it will take years to weed them out, as most priests only read the bits they highlighted in marker pen for their first sermons when they were starting out. They can’t remember what’s supposed to be there unless it’s something they thought sounded snappy when they were 22. I told one guy about the bit where God sends a bear to kill some kids who laughed at a bald man. He thought I was taking the piss! The only people who read bibles are people arguing on the internet.”

To sum up, Attitude asked him what it was like to be a gay Pope:

“Being a gay male Pope is pretty much like being a straight male Pope, except thoughts about penises involve less guilt.”

Jorge has now technically been fired, but refuses to leave his quarters until the cardinals can find a bible verse that says exactly why he can’t be Pope. He reckons he’s got another month at least.