Posted by thepoetscane on December 15, 2015 in Latest News

Serial film remixer George Lucas has once again pissed about with one of his films. Speaking by skype from his secret ranch on the moon (or is it?), he said:

“I’ve always felt that I couldn’t do what I wanted with American Graffiti, which was have lots of scenes of people spraying graffiti on things. Back in 1973 I couldn’t afford spray-paint, so I’ve gone back digitally and put in dozens of completely necessary cgi scenes of Ron Howard and Richard Dreyfuss spraying gang tags on walls.” 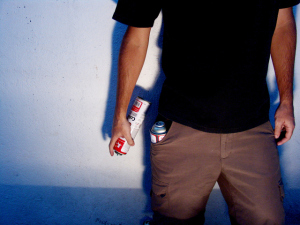 Surprisingly, there has been very little backlash against the new version, because most George Lucas fans were completely unaware he’d directed anything other than Star Wars.

“Wait, what?” Said one bewildered fan.

“So you’re saying there’s no spaceships or aliens in it at all?” said another.

Journalists who have seen a preview of the film say it now makes absolutely no sense, with…