Posted by thepoetscane on December 5, 2015 in Health and Lifestyle, Latest News 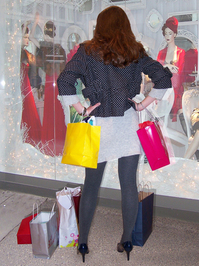 A woman has been given an 8-month suspended sentence for lying about top clothes retailer Primark. The woman, known only as Chelsea, is 27 so ought to know better than to tell porky pies, and is from Swansea which is somewhere in Wales.

Chelsea sold her story to the Daily Star last autumn in which she claimed that her local Primark store on Church Avenue sold her a well made jumper that did not fall apart after three washes. Her lies were uncovered when she ludicrously claimed that the jumper was hung on the right size hanger.

“We weren’t convinced to start with. We thought maybe it was a fluke that she got a good top, but when she said that it was on the right hanger,  we knew she was talking out of her arse. We specifically train our barely out-of-school mostly female staff, to not put clothes on the right hangers. We believe it takes the fun out of rummaging around insanely ordered rails. In fact, Chelsea’s jumper was a size 14, and we only stock size 8 hangers. Everyone knows that. Well, not Chelsea, but everyone else.”

Chelsea is very, very sorry for her actions, but will face much criticism over the fact that she has set the ‘you get what you pay for’ movement back at least ten years.