Posted by thepoetscane on December 2, 2015 in Health and Lifestyle, Latest News, UK 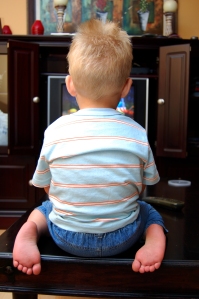 Ambulance crews were called to a Liverpool address yesterday morning after a frenzied and confusing 999 call.

A man was found slumped in front of a television with his toddler son, while episodes of the toddler show Twirlywoos played on the screen. Paramedics say he appeared to have difficulty focusing on reality, and liquid appeared to have dribbled out of his ears. He is currently under observation at the local intensive care unit, while the boy is safe and sound with his mother.

“We’ve seen cases similar to this, but never this severe,” said one of the paramedics at the scene.

What follows is a tanscript of the 999 call:

O: Sorry, sir, I don’t think I quite caught that?

C: Why? Why do they fly over the sea?

C: Every week, they direct the boat to land, just so the colourful pigeons that live in it can learn something new. But why?  Why is the entire existence of these quacking birds centred around four pigeons living in a boat?

C: Everything is done for the twirlywoos. They get fed and watered and taken to educational adventures by the birds and the boat and Peek-a-boo. But why? Why are they so special? Why don’t the birds or the peekaboo thing get looked after? Is it all a metaphor for something?

O: Sir, are you in some kind of situation? We can send an ambulance to you, but I need an address.

C: Every day. They’re only ten minutes long, but we’ve got dozens of them recorded, and he just watches them over and over, and if you stop playing them he cries and won’t stop, so we put them back on. I’ve seen all the episodes. Over and over and over.

C: Why did they invent such easy ways to record things? This is cruel. I had two Squiddly Diddly VHS tapes when I was his age. They only lasted a few views and then they were fucked. My parents had it easy. Now it’s just endless wall-to-wall Peppa Pig and Twirlywoos and In The Night Garden. I can’t cope with it anymore. We’ve got fifty squillion gigabytes of recording space and there’s one percent left. It’s all his stuff.

C: My brain, it can’t take any more, it hurts. My head is burning inside. Th- AAAAARRRRRRGGGGGHHHH!!!!!!!

Mental health professionals claim that incidents like this are likely to rise in the future, and that adult ‘children’s television disorder’ should be recognised as a public health emergency.