Posted by thepoetscane on November 28, 2015 in Latest News, UK 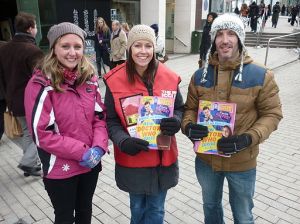 Manchester are to be the first UK city to trail the Big Issue‘s new sister magazine, the Little Issue. It will be sold by vendors in the city from next week, as an alternative magazine for the public to buy.

“Big Issue sales have gone down a bit lately, so we commissioned a survey to find out why. It turns out most people couldn’t give two hoots about big issues like homelessness, the environment or war. The title alone was putting people off, making them worry their little brain cells into a tizz over the thought of thinking about things in any in-depth way. So we responded to our market.

“In the Little Issue, you will find articles on the likes of X-Factor, Sienna Miller (yes, still), The One Show, Fifty Shades of Grey, candles, mainstream TV dramas… All things which require no thought at all. There’ll be competitions in the form of ridiculously easy multiple choice, pictures of hunks and babes, adverts for clothes you don’t need, recipes you’ll never use but will make you feel like you’re a bit of a foodie. It’s the perfect magazine for the average person in the street. And the first issue comes with a free pen!”

Homelessness charities are worried that the Little Issue will cheapen the very serious issue of homelessness, and are asking that the Big Issue reconsider the introduction of the new magazine. Bill disagrees:

“We’re not saying homelessness doesn’t matter. It does. It’s a ‘big issue’. But there is room in the world for the ‘little issues’ too. All issues are issues in the end. Ultimately, we just need to sell some fucking magazines.”