Posted by thepoetscane on November 7, 2015 in Health and Lifestyle, Latest News, UK 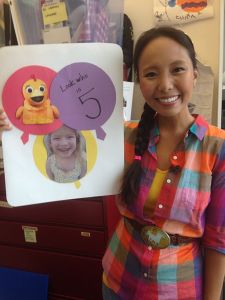 By erochelson (I took this photo) [Public domain], via Wikimedia Commons

A woman from Cornwall has been appalled to discover that the homemade birthday cards sent into toddlers’ TV by one and two year olds are actually made by their parents.

Hannah Caldwell informed us that she was told the surprising news one morning by a friend with a one year old boy.

“At first I couldn’t believe what she was telling me. ‘What do you mean, they can’t make those cards?’ I asked her, incredulous. So she gave her son some pritt stick, safety scissors and cardboard, and let him loose. He ended up with his face stuck to the cat and the cardboard shoved down his nappy.

“It’s been an absolute revelation. Most of them aren’t even toilet trained, apparently. Why would they lie on television like this? Why do the parents even make the cards? If the kids can’t make those cards, they certainly won’t understand what’s going on when the presenter holds them up to the camera. Who are the shows even aimed at? Apparently Josh, my friend’s son, only watches the shows for the silly noises and bright colours.”

If this seems like a light-hearted tale of a minor misconception, it’s worth pointing out the consequences of Hannah’s ignorance.

“I’ve completely misjudged the capabilities of very small children for years,” she said to us. “I used to think they were rude when they never held doors open. When I went to friends houses, and they had to leave me with their child, I would ask them for a cup of tea and wonder why they just dribbled on me. I would ask them what they thought of Broadchurch, expecting an almost Hayley Joel Osment level of conversation. All I got was “Gar!” repeated at me over and over. Apparently it meant ‘dog’. Didn’t sound like ‘dog’ to me.

“I could never understand why they just sat there either, or walked back and forth across the living room carrying things. Maggie in The Simpsons used to go off and do her own thing, plotting assassinations or whatever. TV is just so misrepresentative of children.”

Hannah is now planning on writing a book for adults on how children aren’t actually multi-talented geniuses. Her publishers have asked her to tone down the big words, as most adults have a literacy age of nine.