Hairy Bikers Turn Out to be Ant and Dec

Posted by thepoetscane on October 16, 2015 in Entertainment, Latest News, Out of This World, Science 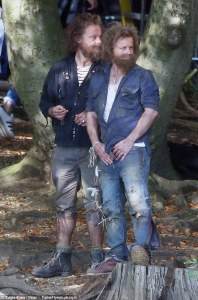 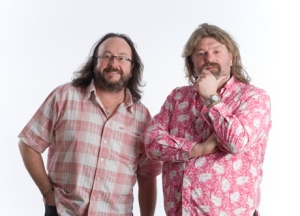 The worlds of entertainment and science have been rocked by the revelation that the ‘hairy bikers’, otherwise known as Dave Myers and Si King, are actually a middle-aged Ant and Dec who have time travelled from the future.

The discovery happened during the first day of shooting for ‘I’m A Celebrity Get Me Out of Here’, when Declan Donnelly went to meet the campmates, including Dave Myers and Si King. As soon as Dec went to shake Dave’s hand, Si was heard screaming, “Fucking hell, Dave, no! Remember paradox school!” but was too late. As Dec and Dave shook hands, there was a flash of light as time altered to accommodate the paradox of someone shaking hands with their future self. Fortunately, all of the contestants within three feet were obliterated. Unfortunately, the show is now presented by Hale and Pace.

A rueful Si had to admit on air the truth behind the incident:

“Well, the cat’s out of the bag now. Me and Dave are actually Ant and Dec from the year 2039. Truth is, TV in the future couldn’t accommodate our changing personas. We both inexplicably got into cooking and riding motorbikes. Declan dyed his hair and had an unexpected growth spurt which confused most of the viewers who could only differentiate us by height or hair colour. We got into beards after they stopped being popular, and our show ‘The Fat Hairy Bykers’ was a commercial bomb. To top it off I got sick of only seeing the right hand side of Dec’s face. I knew it better than the backs of my hands. There was only one thing for it: to travel back in time to when beards, bikes and cooking were ridiculously popular, and revitalise our careers. We just made up some back stories, booked a ride in a machine and off we went. It worked so well until now.”

Dave – sorry, Dec – was quick to defend their actions:

“It’s all completely legal in 2039. There’s all kinds of training and regulation for those wishing to time-emigrate. Time travel was invented in 2035 by an independent group of scientists funded exclusively by TV entertainment conglomerates. Science funding was zilch back then, I mean forward then, er. Anyway, TV companies were the only ones willing to provided funding, so time travel is used pretty much only by TV celebs like us.”

When asked if there were any more contemporary celebs who were actually time travellers, Si/Ant said:

“Oh yes. We’re not supposed to say, but we probably should just in case there’s another incident like today. There’s a few cooks. Mary Berry is actually Lauren Laverne. Hestor Blumenthal used to play Ben Mitchell in Eastenders when he was younger. Most of the contestants on X-Factor are the children of messed-up celebrity couples trying to become famous enough to knock their parents’ records off the number one spot. That’s a popular game that one. Brian Cox the scientist is actually Brian Cox the actor after a lot of surgery and voice coaching. Fred Dibnah was Sean Astin. Bruce Forsyth is Bruce Forsyth: he received the first immortality serum as a lifetime achievement award and just keeps looping over and over his favourite decades. ”

Before the police arrived, Ant and Dec senior were asked what was next.

“Well, we’ll probably go to jail for several counts of manslaughter,” said Dec. “However, we may just disappear from the timeline before that happens, as it appears we may have permanently traumatised our younger selves to the point that they will probably give up their careers altogether. So this is probably the most exclusive interview you’ll ever get. Congratulations!”