Posted by thepoetscane on September 2, 2015 in Entertainment, Latest News, UK 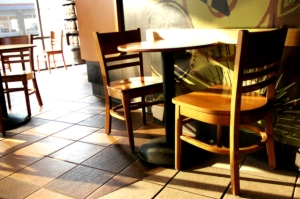 Several workers at a generic coffee shop chain that we’re not allowed to name exploded into tiny pieces today after one customer too many ordered ‘something that isn’t on the menu’.

“One lady asked for a cheese and ham toastie without the ham, despite the fact that there was a plain cheese toastie on the menu.”

“Another asked for a hot and spicy panini without the hot.”

Jenny, who was standing in the queue when the incident happened, said: “I knew there’d be trouble when seven consecutive customers couldn’t remember their order number despite it being on a piece of paper in front of them.”

Kevin, who was sat in the corner for hours on end with a glass of water using the free Wi-Fi, said: “One customer sent the cappuccino back eleven times saying it was too cold, but all he’d done was taste the froth on the top.”

There were several reports of customers ordering drinks that didn’t even exist, like a cappuccino without the froth, or a black latte.

The owner of the coffee shop, whose body parts remained intact because he was arsing about in the stockroom at the time, told us:

“These explosions happen all the time. It’s the real reason there’s such a high turnover of staff in retail.”