Posted by thepoetscane on August 30, 2015 in Latest News, UK

Creator Jennifer Wiggins described the show as “a cathartic, unoriginal one-joke wonder desperately dragged out over ten weeks in an attempt to make as much money as possible.”

“Mum calls me Nelly Wetdrawers in public. This is my revenge.”

We had not heard of the show, or its creator, so in the absence of any real questions, we asked Miss Wiggins to recount some of her favourite motherly shit. She replied:

“’I’ve seen my arse over your misog face,’ is her favourite one. There’s also, ‘I’ve been running around like a blue-arsed fly in a dress.’ She has a thing about arse.”

“There’s: ‘What am I doing? Picking a cueing?’ Not even google knows what that means.”

“I think the most embarrassing moment was when she announced, ‘I bet they make a bloody fortune in here.’”

“Mother, shut up! We’re in Auschwitz!”

Following its original success on Twitter, BBC execs bought the show from Jennifer for a fiver. Following its moderate success, they have since sold it to a Japanese conglomerate for two billion yen, who intend turning the TV series starring Kelly and Sharon Osborne into a stage musical featuring BabyMetal.

It is rumoured that Fred Savage will play the mother. “He’s out of work at the moment and I think he’d look fab in a dress,” says one of the generic producers. If successful, there is scope for a theme park, coffee shop chain and clothing range.

When the real-life Mrs Wiggins was told of the show’s mediocre success, she replied: “What do you want, a Magpie badge?” 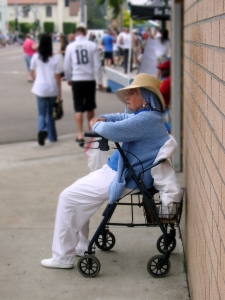