Posted by thepoetscane on August 28, 2015 in Entertainment, Latest News, UK 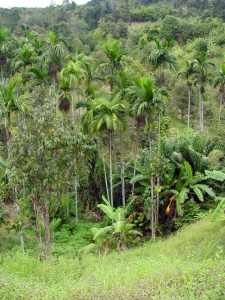 I’m a Celebrity Get Me Out of Here is due to return to ITV this autumn, with a twist.

The producers, who couldn’t be bothered thinking up their own ideas, have decided to pilfer channel 4’s ‘Mash Up’ idea. Following the success of ‘8 Out of 10 Cats Does Countdown’, they have decided to cross I’m a Celeb with X Factor to make a grotesque, hybrid baby.

The love child, known as Jungle Factor (they didn’t have time to think of a decent pun) will combine desperado Z-list ‘celebs’ performing god awful cover versions whilst distracted by rats, wiggly worms and biting insects.

Extra rice will be awarded to celebs who can master the art of fake sincerity whilst eating pigs’ testicles.

Ant and Dec are set to naked mud wrestle Louis Walsh live on TV this Tuesday to see who gets to present the hastily put together show.

A footballer’s wife, 80s pop star and a generic glamour model are tipped to feature. Don’t worry if you haven’t heard of any of them, their agents hadn’t either.

Big Simon, a TV producer from somewhere down south where X Factor is filmed, chirped, “This is brilliant. I couldn’t have thought of a better idea myself…”

The show will air with a ten minute delay, just in case any of them choke to death on a maggot whilst crooning jungle related ditties.

Profits from viewer voting will be split between two almost certainly deserving charities, such as the ‘save Tulisa from extinction’ fund.

Producers have confirmed celebrities won’t be getting paid, as they’re on nil hour contracts.

The winner’s song, a jaunty celebtastic version of Welcome to the Jungle by Guns N’ Roses is tipped to be this year’s Christmas number one.

Tags: I'm A Celebrity Get Me Out of Here, X-Factor Permalink